The Q&A trends you really need to know…

It has often been said that analysts asking ‘3 unrelated questions’ at company reporting sessions allows management wriggle-room to pick and choose which questions they actually want to answer. Analysts might be better off sticking to one priority question they really want addressed and drilling down on the responses. However, we at Veritum contend that these questions are not actually unrelated in aggregate and give clues about the degree of fear gripping financial markets. We argue that an analysis of quarterly Q&A trends is an invaluable barometer of what’s keeping analysts and investors up at night.

For the past 3 years we, the partners at Veritum, have trawled through c.1400 questions per quarter asked of the top 120 US and European financial services management teams to observe changing areas of concern or focus. In doing so our main interest is helping our retained clients prepare for what’s on the way. But we also get a lens on trends for the sector as a whole.

With the Q3 2022 reporting season drawing to a close, we publish the high level summary conclusions from this analysis.

Still such a focus on revenues

Looking at all US and European banks, there has been a clear pattern to the areas of analyst focus, perhaps best summarised as ‘micro bullish, macro bearish’ – i.e. revenues near term supported by rising rates, yet concerns over the darkening economic outlook. Almost two thirds of all questions related to these twin themes, with almost half of all questions on revenues, a record level. 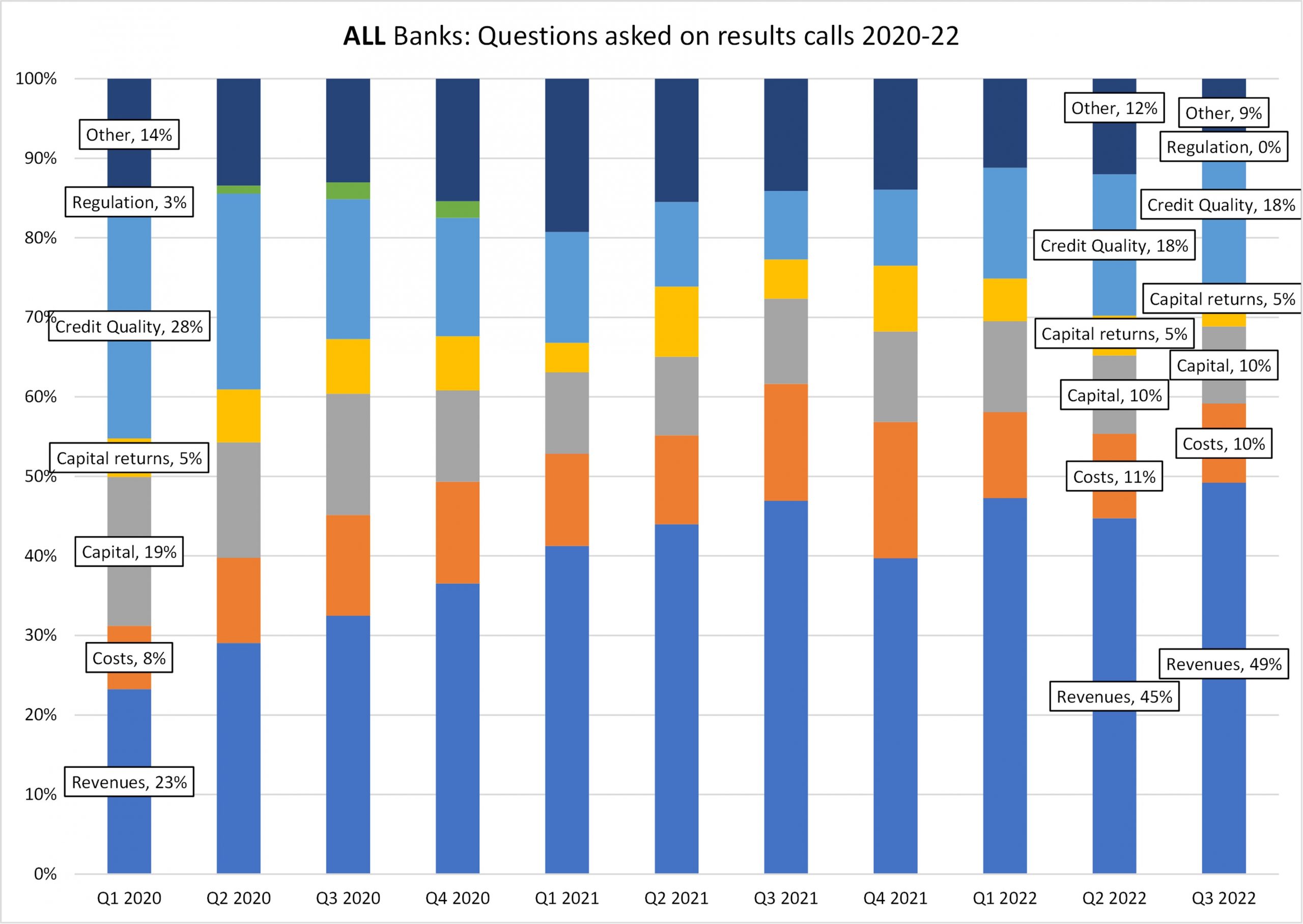 One might have thought that with such macro doom-mongering, revenue growth would start playing second fiddle to concerns over credit quality or capital adequacy. However, actual credit quality deterioration has been negligible so far in 2022 and the consensus view is that bank capitalisation in aggregate is more than adequate to withstand shocks. The surprise in the Q3 results was mainly in reported NII or NIM coming in stronger than expected and analysts are keen to probe how long this may last.

Fearful of attracting too much attention or the prospect of windfall taxes, banks’ management teams may be deliberately downplaying their exposure to further rate rises. The suspicion is that benefit pass-through to depositors so far has been close to zero in markets that are at early stages in the interest rate cycle and that this may be the case for some time. At best most banks are only giving sensitivities around their NII so analysts are kicking the tyres to form their own estimates.

The proportion of questions around credit quality rose strongly in the prior quarter and has remained at almost a fifth of the total, still some way below the pandemic peak of Q1/Q2 2020. There are clear differences by geography. The UK, beset with huge political turmoil, faced the greatest concerns about credit quality deterioration with almost one third of all questions on that topic; by contrast, in the US, credit quality related questions actually declined to only 16% of total.

Inflationary expectations and the cost-of-living crisis do not yet seem to be driving up the proportion of questions around costs, remaining roughly constant quarter on quarter at 10% of total overall, although rising in the US. This is perhaps the result of financial services companies’ expense bases not having a significant energy-related component and the M&A talent pool remaining subdued.

Capital levels appear to be viewed as adequate or overcapitalised in aggregate. As a result, the proportion of questions around the capital base and capital return areas was flat quarter on quarter.

The two most obvious changes to emerge from the US banks’ reporting season was a rise in the proportion of questions on cost base and reduction in proportion related to credit quality.

This could merely be the result of reported delinquencies and impairments remaining so low to date.  Generally, in Q4 US banks’ management teams give guidance on their forward cost budgets and analysts could be trying to get ahead of this. The proportion of questions focusing on revenues and revenue outlook fell slightly quarter on quarter to just under half of the total.

Across the European banks, questions around revenue trends rose to a record level of 49% of total whilst the proportion of questions around credit quality increased modestly quarter on quarter to 18%. Within that, the clear focus was on net interest income/margins and the impact of the rising rate environment. We are not yet seeing any increased focus or concerns around cost trends or capital adequacy at an aggregate level. In fact for both categories the European proportion declined slightly quarter on quarter to 10% of total for capital and 9% for costs. 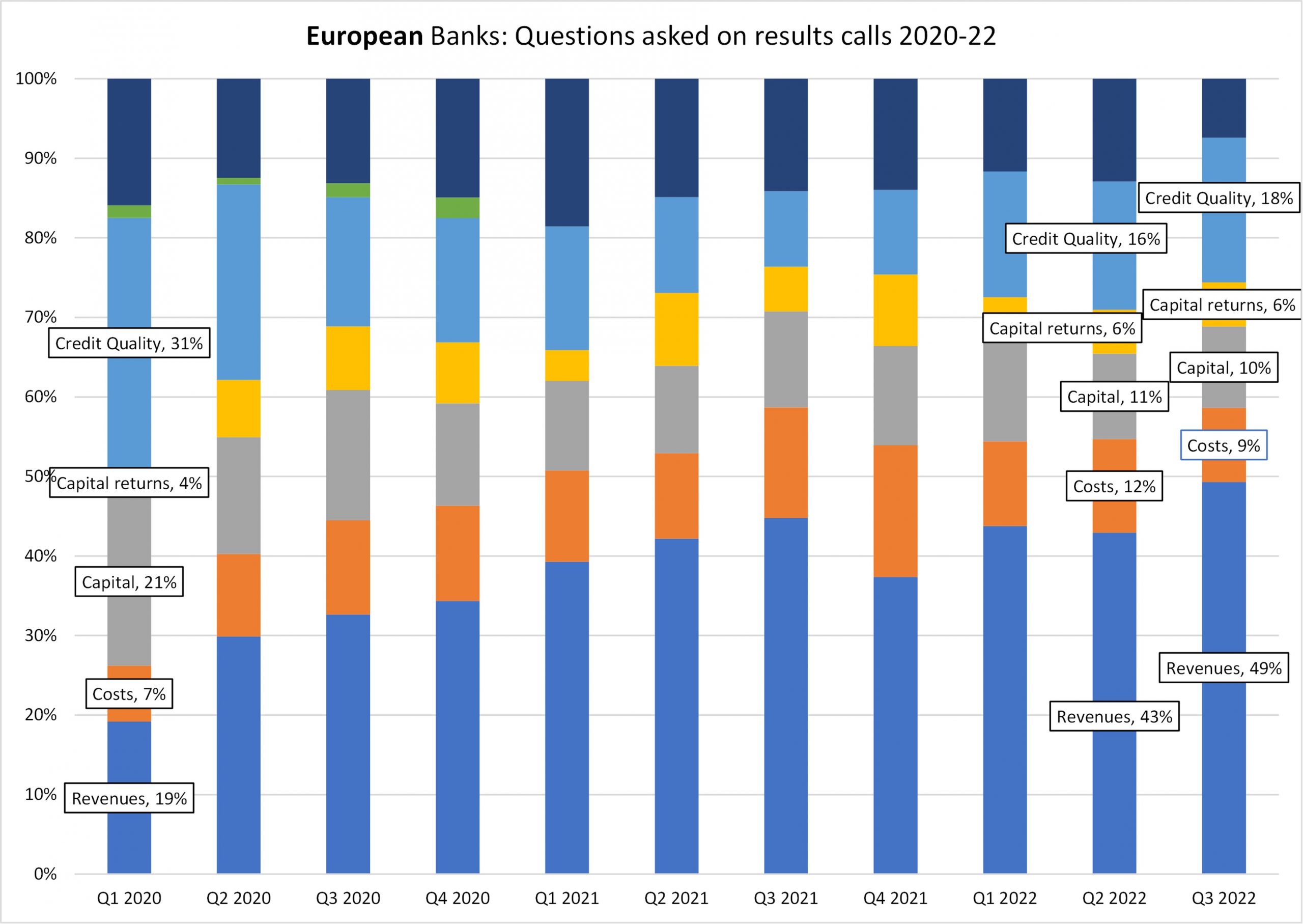 For the UK Banks, there was quite a strong decline in the proportion of questions related to revenues and a corresponding increased focus on credit quality. This is likely due to the political uncertainty, rising government bond yields and the UK’s relatively high sensitivity to the energy crisis. UK management teams continue to assert the conservative nature of their forward macro assumptions and the build-up of excess provision stock during the COVID crisis. Unemployment is still argued to be the major potential driver of any provisioning shock and here projected increases remain only modest. How the UK consumer behaves with higher unemployment coupled with higher inflation and a higher tax burden remains the key unknown. 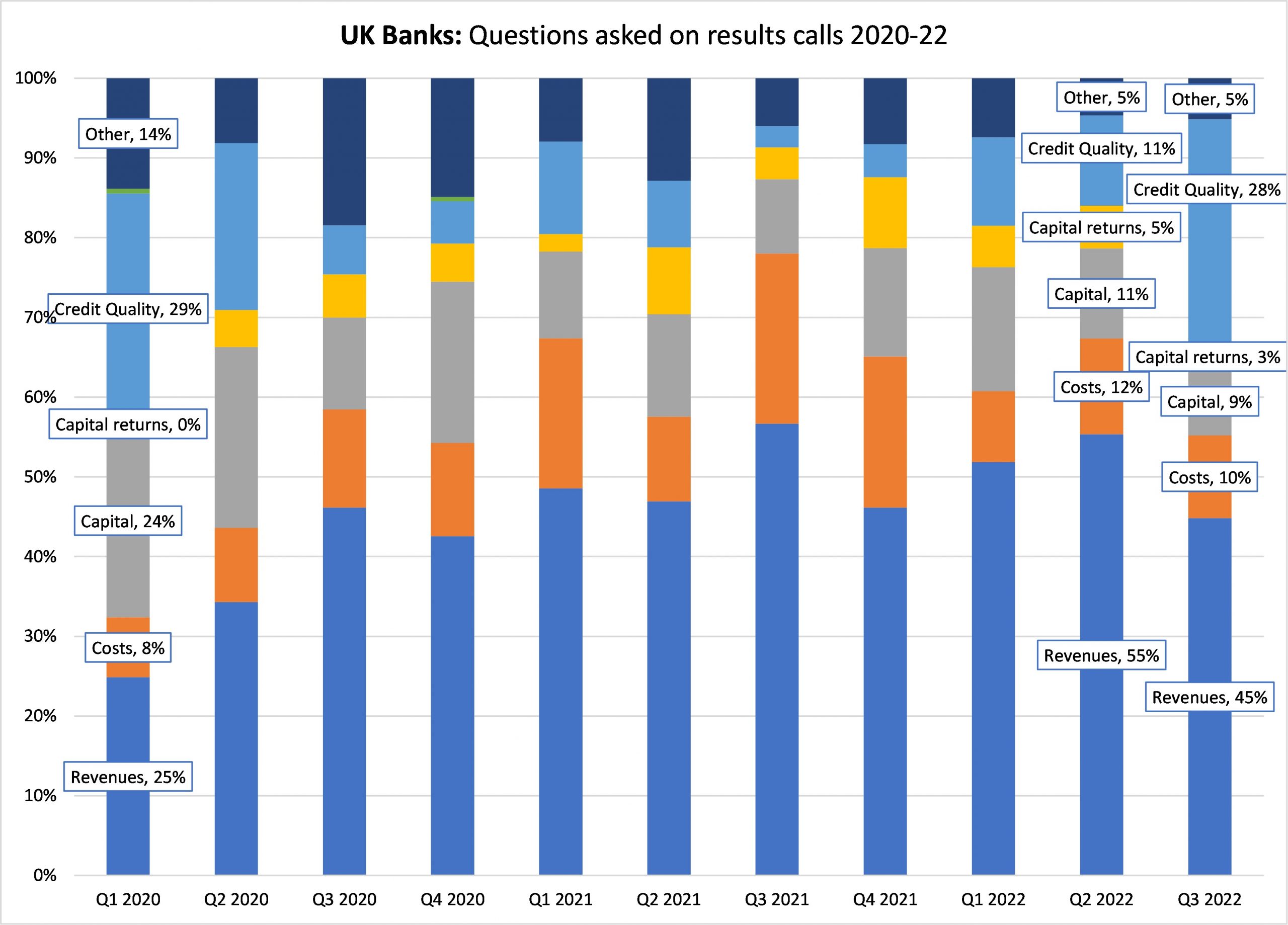